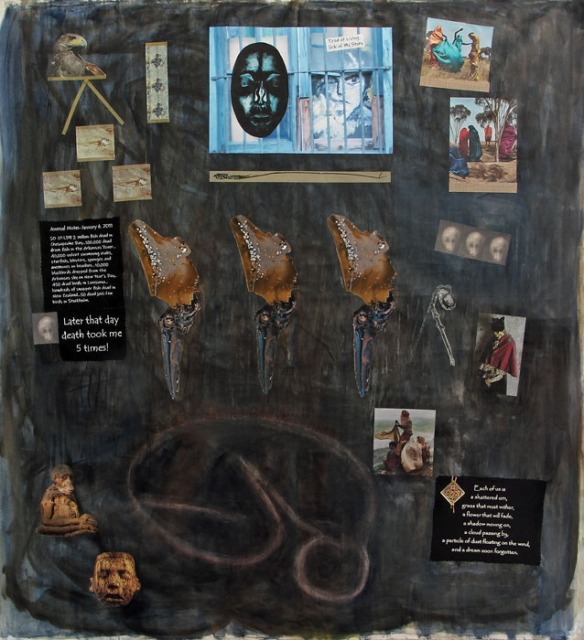 The canvas of this painting with a rough sketch of a collapsed figure lay on my studio wall for several years, gestating. I had a hard time working on it as it dealt with my catastrophic accident leading to my having, and surviving, 5 cardiac arrests on January 6, 2011 – the Feast of the Epiphany.

Finally completing “Catastrophe” and posting it here and on my Optimism of Color blog has removed what seemed like an albatross from my studio wall and lifted my spirits!

This 72 dpi photo of the painting may make it hard to read the words on the canvas, but as they are important to its meaning, I’ve provided a few notes on some of them.

On the morning of January 6, 2011, I had made the following entry in my journal:      SO COLD!!! 2 million fish dead in Chesapeake Bay…100,000 dead drum fish in the Arkansas River…40,000 velvet swimming crabs, starfish, lobsters, sponges and anemones on beaches…10,000 blackbirds dropped from the Arkansas sky on New Year’s Day…450 dead birds in Louisiana…hundreds of snapper fish dead in New Zealand…50 dead jackdaw birds in Stockholm.

I felt that these words, which could have been my last written words, were prophetic, a harbinger of the catastrophe that would soon befall me. I knew too, that I would have to incorporate them into my painting. I embroidered and positioned these journal notes on the left side of the canvas – just above the words – Later that day death took me 5 times!

On the right side of the canvas, I embroidered words from a Jewish prayer that had always moved me: Each of us is a shattered urn, grass that must wither, a flower that will fade, a shadow moving on, a cloud passing by, a particle of dust floating on the wind, and a dream soon forgotten.

DANCING AROUND THE VOID 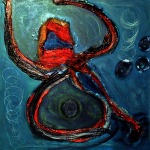 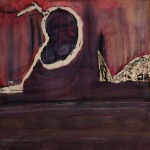 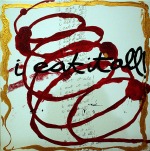 In these works, I’m exploring those moments of luminosity and understanding that hover between life and death, being and non-being, meaning and ambiguity. How the chaos of life in its infinite complexity resolves itself in death and regeneration.

For several years, I have been exploring the yin/yang of this life-dance/void experience. Existentially, we constantly dance around the void, trying to accumulate meaning. We may live in the here and now, but there is always the big emptiness that surrounds us. I am examining the unframed, raw edges of life where a series of events and misadventures guide us from “the tomb of the womb to the womb of the tomb”.

A recurring theme is the fragility of life and how we can best respond to that delicate framework with its sudden shifts in direction, tone and mood. Stephen King talks about how “life turns on a dime”. We cannot know what is to come; we can merely dance the dance until the end of the song.

With these works, allusions to both personal traumas and global tragedies abound. And in the end, dancing in the face of the void is all we can do – that is the reality we must confront.